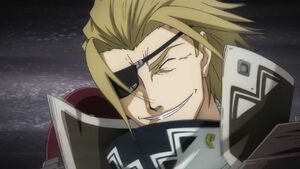 One of Athens most infamous Generals. To his subordinates he is seen as a loving father and a good friend, but in reality, he is a cold and calculating man who will not hesitate to commit heinous acts of barbarism to achieve his goals. Borcuse was placed under house arrest for committing a war crime during the Invasion of Assam, where he slaughtered innocent villagers and displayed their bodies as a way to intimidate and bait his enemies. The Athens government pardons Borcuse and makes him leader of the Krisna Invasion Force, believing that his tactics, while brutal, are the fastest way to defeat Krisna. He is a highly skilled mech pilot and is accompanied by five other specially chosen pilots who serve as his elite guard and troop commanders. When Borcuse attempts to slaughter a village to goad the Krisna forces, he is confronted by Rygart and the two duel. Rygart Arrow manages to deal a significant amount of damage to Borcuse's Golem but the General becomes 'bored' and disables the Delphine. Recognizing that the Delphine is ancient technology, Borcuse orders Rygart to be killed and his mech taken back to Athens but manages to escape, dealing a blow to Borcuse's pride. Borcuse's reputation suffers another blow when Girge duels and kills one of his commanders, Bades including the elite Golems that were accompanying Bades. He is eventually killed by Rygart during his siege on Krisna. 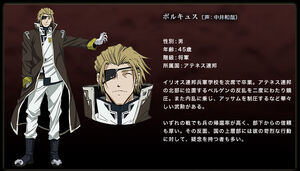 Retrieved from "https://breakblade.fandom.com/wiki/Borcuse?oldid=4526"
Community content is available under CC-BY-SA unless otherwise noted.